City of Poway water is safe to drink. We’re happy to report that the precautionary boil water advisory issued Nov. 30, 2019 ended with confirmation that drinking water remains safe. Regular water testing continues throughout the city, and Poway’s water distribution system continues to meet health standards. Though the boil water advisory has passed, we remain committed to providing up-to-date information and answering questions. Should you have questions, please call our Public Works department at (858) 668-4700.

We remain grateful to our community members and customers for their patience during this challenging time, our remarkable staff and city leadership who have worked around the clock to ensure safety, and our water utility neighbors who rapidly came to our aid.

Over the following 7 days, the city collected 255 samples of water from a number of residences, businesses, and our distribution system storage facilities and analyzed them for two primary types of water quality parameters: the first was the disinfectant level to ensure that the water continued to be properly disinfected, and the second was for the presence of bacteria in the water. The locations from which the samples were taken have been redacted to respect the privacy of residents and to maintain the security of the water system.

The significance of these two tests is presented here, along with all the official laboratory reports containing the results.

The city has completed its incident report and sent it to the state for review. When the state is done with that review, the city will be advised of their findings. 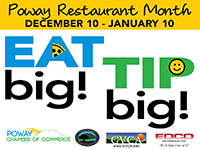 Local food establishments were especially inconvenienced during the precautionary boil water advisory, but the Poway Chamber of Commerce and City of Poway are doing something to help. The organizations have partnered on the Eat Big Tip Big campaign to promote getting people to dine out and help out those who were most impacted. Learn more on the Poway Chamber of Commerce website.

On Wednesday, Dec. 11, the Board of Supervisors voted to approve the waiver of the $459 fee for the Modified Health Permit. This was the permit restaurants applied for to reopen with a modified menu while Poway’s precautionary boil water advisory was in effect. For questions, please call the County’s Department of Environmental Health directly at (858) 505-6900 or by email for assistance.

About the Advisory and the City's Response

On Nov. 30, 2019, at the state's direction the City of Poway issued a precautionary boil water advisory following a heavy rain event that caused some stormwater overflow into part of the City’s drinking water system. The boil water advisory ended Friday, Dec. 6 when water samples confirmed the ongoing safety of Poway water. All testing conducted during that seven-day period confirmed the safety of the drinking water and the water system; however, it was important to follow state regulatory procedures, which called for a series of tests and water quality confirmation.

The event began on Friday, Nov. 29, following days of heavy rain, when the city Public Works department received five calls from residents reporting discolored water. Though city offices were closed for the Thanksgiving holiday, the Public Works after hours response team was immediately dispatched to test the water at each of the five residences. Tests for chlorine residuals, which is an important water quality indicator, at these residences as well as other sampling points in the Poway water distribution system found the water to be well within health standards.

However, since the water discoloration appeared to be citywide, out of an abundance of caution, Poway water officials notified the State Water Resources Control Board and all parties determined a precautionary boil water advisory was in the best interest of our community. Customers were quickly notified of the advisory through the county’s reverse 911 system and multiple other channels, including an alert to business customers in the water billing database. As part of the state’s notification process, the county’s department of Environmental Health issued closure notices to Poway food establishments. The city set up two distribution points to provide bottled water to its water customers and distributed 117,850 gallons of water.

The specific cause of the discoloration was a storm drain that backed up into our water treatment facility’s clearwell reservoir during storm. These facilities have been in place for more than 50 years and are regularly inspected, including as recently as fall 2019. The City promptly secured the stormwater outlet to eliminate any future backflow occurrences and flushed the water distribution system to ensure all pipelines are in proper condition.

Friday 11/29: Public Works receives calls from water customers and send after hours response team to test water at residences. Chlorine residuals, an important factor in water quality, were well within health standards. Turbidity, which has to do with clarity, was high. Public Works set out to determine source of the discoloration.

Saturday 11/30: Crews complete an extensive examination of the City's water distribution system to identify and isolate the source of the discoloration. A storm drain attached to the clearwell reservoir at the water treatment facility was identified as the source of the discoloration. Chlorine residuals were still within standards; turbidity was still high. The City contacted the state and a precautionary boil water advisory was issued. At about 6 p.m. the advisory was finalized, and notification went out to residents.

Monday 12/2: The City began draining the north section of the reservoir in order to isolate the area affected and disinfect it. A second bottled water distribution site was set up at City Hall.

Tuesday 12/3:  The clearwell was disinfected and refilled. The City was able to share testing results showing Poway water continues to meet health standards as two certified test results taken since the incident began showed that the water is absent of bacteria. An update was provided by Public Works at the City Council meeting.

Wednesday 12/4: Water samples were collected for the first of two state-required tests. The City followed state protocol for testing and reporting information, which required two water sample collections 24 hours apart taken the day after the clear well was disinfected and refilled. In addition to the state-required test, the City received its third certified testing results that the water continued to meet health standards.

Thursday 12/5: The City collected the second round of water samples required by the state (to be collected 24 hours after the first samples). City also received certified results from Wednesday’s required tests, which showed that Poway water continued to meet health standards. These results were forwarded to state for review.

Friday 12/6: At 5 p.m. the City received the second round of state-required test results. These certified results showed that Poway water continued to meet health standards. (Read complete testing results.) Results were sent to the state for review and at 6 p.m. the state approved the cancellation of the advisory.

Local businesses can reach out to the Small Business Administration (SBA) for funding help (loans, traditional and non-traditional). SBA can also assist on creating a budget to minimize expenses and a plan to move forward including marketing and finding other revenue sources so businesses come out ahead instead of behind.

The Small Business Development Center will have “office hours” in Poway on Monday’s beginning in January for free one-one-one business consultations. Through December businesses can access help through the Carlsbad office (760-795-8740). Consultants assist with business planning for recouping sales and customers, as well as reducing costs and risks.

The best way to ensure that you receive notifications during an emergency to register your phone number(s) and email with the County of San Diego's reverse 911 system. Go to AlertSanDiego.org to sign up.